EDITOR'S NOTE: This is the first in a series of seaside stories about coastal lifestyles.

It's 4 o'clock in the morning, and I'm living testament to the powerful grip surfing holds over the popular imagination. Hours from now, I'll climb onto a surfboard for the first time in my life, and, completely to my surprise, the anticipation has kept me awake all night.

Everything from the prospect of my own endless summer to visions of Annette Funicello keeps my heart racing, playing muse to my insomnia.

I had heard on good authority that the morning waters off Zuma Beach had the best slow breaking waves for a new surfer, along with lots of lifeguards. And, let's face it, have you ever heard of a cooler name for a beach than Zuma? So last week, when my editor announced that each writer should write a first-person profile of a Westside beach, I pounced on the opportunity to head to Zuma for some surfing.

It took a few phone calls to track down longtime local surf instructor Joel Shultz, 49. But he seemed to be exactly what I was looking for: Not only could he wax philosophical about the relationship between surfer and surf, but he knew where "Gidget" and "Point Break" were filmed.

We arranged to meet on the sand in front of lifeguard tower 13 at Zuma Beach on a Thursday morning.

To be sure, half the people on the beach seemed to know him by name.

In the 60's surfing has an all-American image,' he said_ "It still does, but these days it also has a heavy punk-rock influence. It's affordable for the outsider type. You can surf for three years for $500, the cost of a board and a wet suit." We practiced the classic surfboard ascension, while still on the sand: Grip the rails parallel to your armpits, put your feet in a runners' stance on the tail; then, using your arms, jump onto the board feet - not knees - first. Balance, release your grip and stand up.

In the water, new elements are added to the equation. The most difficult is knowing when to stand up to successfully ride one of the rolling waves.

For those who haven't tried it, the best analogy I can think of is learning to drive a stick-shift automobile- You know that 'sweet spot" where, between releasing the clutch and punching the gas, you smoothly shift between gears? Surfing is like that, only the surfboard is the clutch and the water is the accelerator.

The two elements come together somehow, and in that magical moment, you just stand up and ride.

Before the first time I managed to stand up, I knew the experience was corning. It was about my fifth try and this seal that had been playing around us for the last several minutes popped his head up out of the water and - I swear to God this happened - looked at me and winked- Next thing I knew 1 was walking on water. The sensation of surfing is intoxicating. And once you've done it, you're dying to so again. I understood for the first time the single-minded possessiveness and reverence many surfers have for their chosen pursuit. Though for a beginner, of course, it's hard to coordinate all the needed movements into a long ride.

The ride Listed nearly 20 seconds, according to Shultz's waterproof watch. But I had been composing it for years

For surf lessons, Joel Schultz at Surf the Bu, www.surfthebu.com.

Good Malibu beaches for beginners, said Schultz, are Zuma ("if the surf is reasonably small â¦ it is really the only beach break [sandy bottom] available that breaks out far enough for a decent ride") and Sunset Beach by Gladstone's restaurant ("a rock bottom surf spot that is also a good choice since its waves are so slow and gentle"). 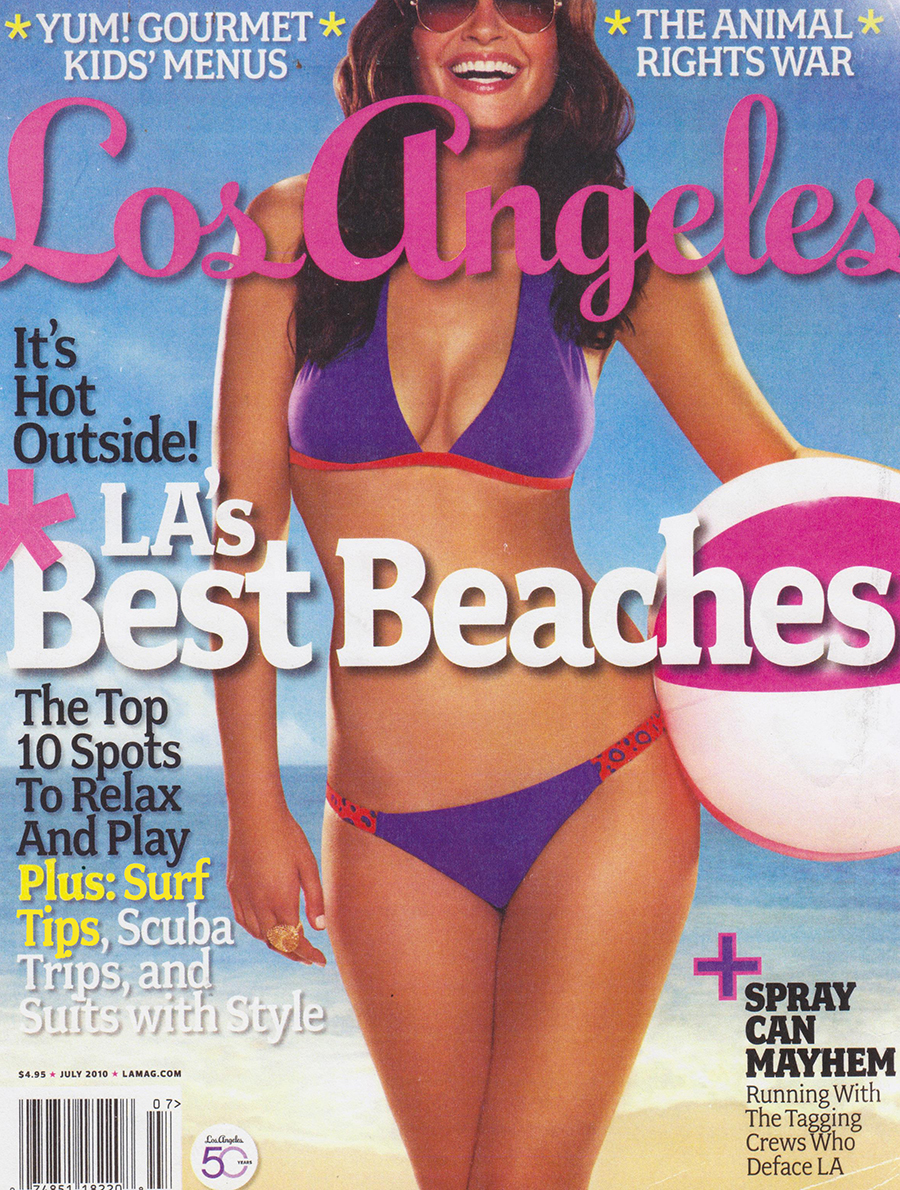 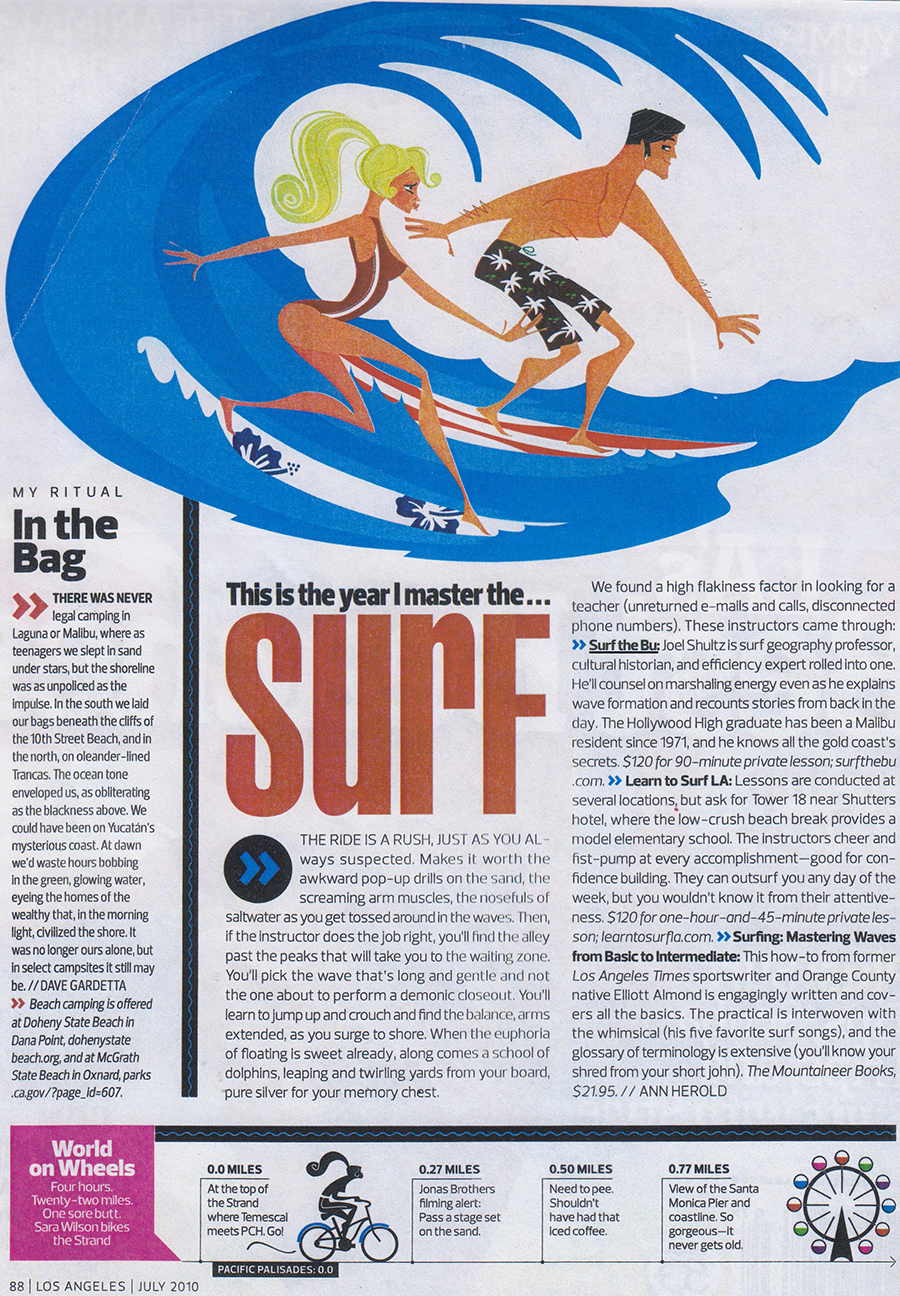