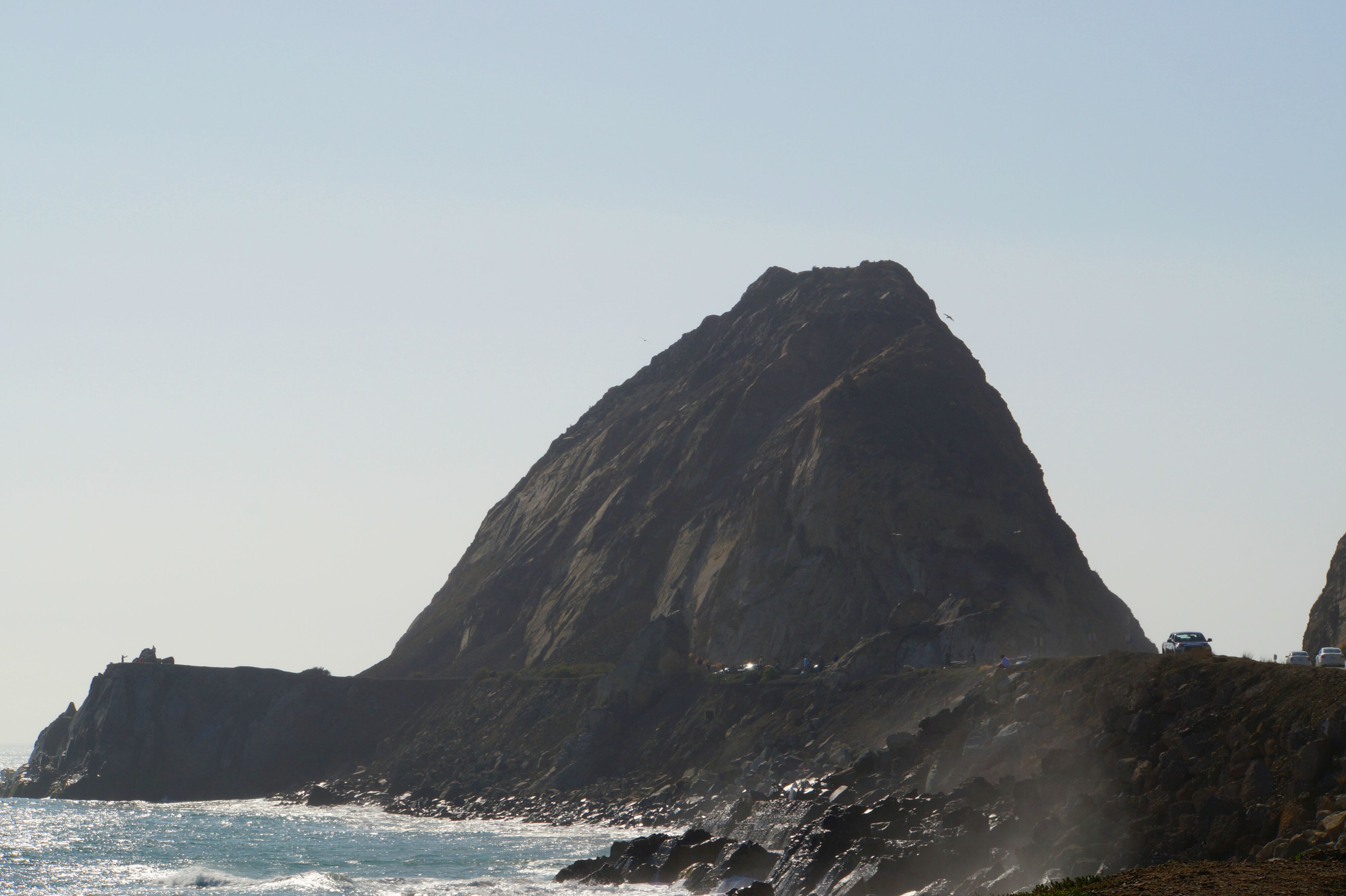 I first heard of "Calleguas" back in the mid-70s from none other than Topanga Beachâs top locals: George, Davey, and "The Riddler." They spoke about it in reverent, exalted, hushed tones, a secret surf spot that was a Malibu-like sand point located a mere eight miles north of Neptune's Net, just north of Mugu Rock. Trouble was though; the place was located smack dab in the middle of Government territory-Point Mugu Naval Base.

Apparently the boys had been dawn patrolling it, waking up with the birdies and sneaking in under the cover of darkness, and getting the hell out of there by 9 a.m., no later. You wouldn't want to linger too long and chance getting busted by military personnel driving by on amphibious vehicles.

So, in effect the boys were playing a type of Russian Roulette as they scored privately protected, barreling, world class, rare sand point rights, usually all to themselves, maybe sharing it with a couple of amped up, thrill seeking boogie boarders.

To me, it didn't seem worth the risk, but a few years later, early 80's, an old surf buddy of mine, fed up with the Malibu crowds, contacted me to say that he, himself, had been sneaking in lately and "getting away with it." He convinced me to accompany him in, and, curiosity getting the better of me, I agreed.

What I found was indeed a secret spot: 1) Hidden from the highway (You had to partially climb a hill across P.C.H. to see the lineup); 2) you had to either boat in (still navy waters), or walk the beach, about two miles north past a live firing range; and 3) or you could high tale it through a mosquito infested wetland with some strange crustacean biting at your feet, then wade through a lagoon, climb a sand berm, and you're there! The latter was our choice du jour... You could drive by this part of the highway countless times and never dream such a pristine surf break existed there.

But man, once you finally climbed the small dune, you were dumbfounded by the sheer beauty and perfection of the spot. Pristine. Not a fragment of trash around, no cigarette butts, plastic, paper, just undisturbed, golden sand coupled with a sand point that was a cross between Malibu First Point and Santa Barbara's Sandspit. It resembled First Point, just a bit shorter, but broke in shallow water over manicured sandbars, spitting and hissing its way all the way to the shore. No crowd to speak of. Just the sounds of the ocean's roar, the cries of passing gulls, and of course, the thumping of your heartbeat as you paddled out. What really made Calleguas unique was its locale, a place where the wave blocking Continental Shelf was absent. The swell rolled through from deep water, through what oceanographers call a "submarine canyon," much like Hawaii. And because of this geological phenomena Calleguas Point was usually 2-3 feet bigger than anywhere in Malibu or the Oxnard areas. It favored summer time souths but could get equally good on wests. The wind usually blew offshore till mid-morning. Rogue waves were nearly a certainty. You had to be aware at all times or you could get caught out of position or forced into a too-late-takeoff and get drilled on the shallow bottom.

The first time I laid my weary eyes on her I glimpsed an inside, shoulder-high wave dancing and prancing its way across a well groomed sand bar, until it finally exploded violently on the shore, no one aboard. I noticed how the Creek and the wave action combined to carve out the classic, rare sand point I was about to ride. The only sounds I knew there were that of the ocean's roar, the cries of passing gulls, and, of course, the pounding of my heart. The first wave I paddled over flashed a brilliant rainbow as it broke. The whole time Iâm thinking to myself, "if I get busted in here I can always plead ignorance and say I hadn't noticed any of the numerous "No Trespassing" signs I ignored." You just couldn't quite feel completely comfortable being on military property.

Once I got used to the routine, I began surfing there, early mornings only, with a couple friends or alone, whatever the case. Some weeks I found myself surfing there as often as three times a week. I began obsessing over it, studying how the changing tides affected the quality of the break. The place almost always delivered the goods. But sometimes it could be maddeningly fickle. It could lure you too far outside so that you'd miss some impeccably shaped, dredging, empty insiders; or it could beguile you into getting caught inside by a double overhead rogue set. But sooner or later you'd catch up to one just right, and soon find yourself on one of the most hollow waves you've ever had and getting tubed as much as three times on one ride!

And did I mention it was teeming with sea life? Too much so! I can't help but remember this one time I was to meet my friend Herk there at 6:00 a.m. He was usually on time if not early, but this time he had overslept. I couldn't wait any longer so I suited up by my car, listening to the sound of the not-too-distant surf from the rest area parking at Vista Point. So I climbed over the wooden barrier with my 6'8" Nev, gathered up my old tennis I stashed there in the bushes, and began the objectionable task of running through the marsh. Upon reaching the shore, I gazed at a 4-6 foot empty lineup, pitching, heaving runners, squarish barrels. I paddled out in the channel and began angling over toward the top of the point. Suddenly, to my astonishment, two extremely territorial elephant seals surfaced on either side of me, flanking me and in effect, surrounding me as I paddled. It scared the hell out of me! One of them barked out warning sounds while the other, probably its mate, bared its huge teeth at me. I was careful not to show them too much skin. They ultimately let me go but shocked me into the realization that something else under the sea even more sinister could come for me next.

Eight foot sets ruled the day as the offshores whistled through the canyon and creek. I considered myself fortunate to score four long set waves all the way down the point before deciding to call it a day. It was 8 a.m. The monster seals, surfing waves of consequence alone, the ever-present military threat, it was all just too much to bear for one day.

The last time I surfed Calleguas, around '82, I believe, was with one of my oldest friends, Demetre, and you just couldn't have ordered up a better session - trading waves, glassy blue conditions, hollow as always, and of course, the best part, nobody else out. It was about 3-5 feet and just firing down the point. We were scoring numerous tube rides and long, makeable walls that were great for pumping turns and carving cutties. Frankly, I can't recall a more pleasurable go-out. But fatefully, we overstayed our "welcome."

As we headed home in Demetre's jeep, we were pulled over near Sycamore Cove Beach by two, not one, but two, nondescript military government vehicles, one of them flashing red light. We were then ordered to show identification and car reg. They ran our info for what seemed the longest time, letting us sweat it out. One of the men, who I guessed might be a surfer, himself due to his rugged looks and deep tan, returned our licenses and told us that they had been "watching us for hours," and had seen us there before as well. He wore a slight grin on his face. Then, one of the other men, a bit older than the other one, told us in no uncertain terms that this "would be the last time we surfed here." If we were caught again, we would be ordered into a Ventura court and tried as spies or, at the very least, charged with trespassing on to military property and fined $5,000.

I was done. I never returned, though I was grateful as hell for all the empty perfection I had experienced, but there was a time to call it quits and it was definitely time. Meanwhile, other hard core addict surfers, adrenaline junkies, continued to chance their way in. Finally the Army Corp of Engineers was called in to stem the trespassing tide by just completely bulldozing it out of existence. Mighty Calleguas Point was reduced to a mushy, overstuffed, meaningless, always high tide shore pound, rendered unrideable.

Just a few years ago, however, big Butch Towers, Hueneme surf guru, let the cat out of the bag by declaring that on occasion, he will fish there and has seen it come back to life on extreme low tides and when the conditions warrant it.

As for me, Iâll always treasure the dimming memories of the place where you could get six-second tube rides and nobody would be the wiser. It was the closest thing to a secret spot Iâve ever known and I will always think kindly of the spot that thrilled me with some of the best waves of my life!